My creative space this week has been all about this little fella and his third birthday celebrations. He's all about 'nee-norr's lately (you know: ambulances, police cars, anything with a siren.. nee-norr nee-norr!) and specifically fire engines. So we had a fire engine party for him and his little buddies. 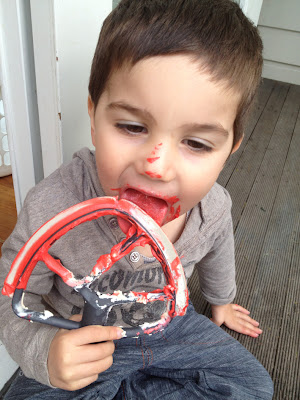 Looking for cake design inspiration I stumbled upon a great picture in a Donna Hay kids party cooking magazine. It looked perfect and not too difficult. The recipe suggested using cream cheese icing (which I was pleased coloured up to a very bright red ;-) and a pre-prepared fondant icing for the windscreen, which I hadn't tried before but loved - so white and smooth... although I did have a problem when half way through constructing it I turned to the cake to put the licorice on and saw the windscreen had slid down the front of the engine... nooo! Just when I was about to crumple into a ball at the thought of my melting cake and still lengthy list of 'to do's (with party goers arriving in just a couple of hours time) my lovely friend arrived to help out and things got back on track - phew! 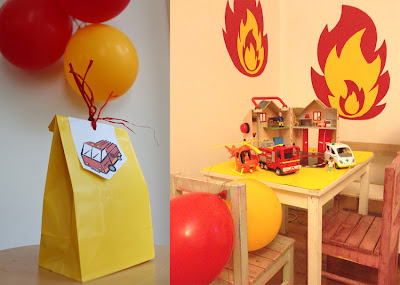 To go with the theme I'd drawn a fire engine with his name on the number plate and used it for the party bags and also a game of 'pin the nee-norr on the burning house'. We set up a nee-norr station for when a bit of quiet play was in order (or not so quiet!) and cut out big shapes of flames and blue-tacked them to the wall, then added lots of red and yellow balloons. 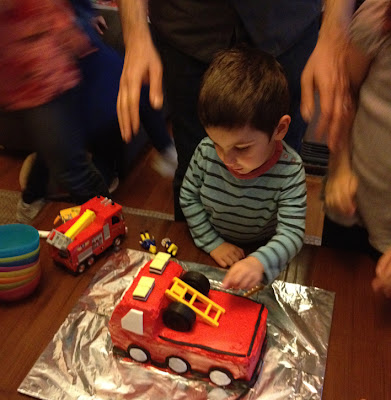 And it was all worth it to see the look on his little face. Which I guess is why we crazy Gen X parents go through the enormous amount of prep required even for a small party.

So, here's to scrumptious 3 year old birthday boys and friends, big and small :-)

Joining in belatedly with these crafty folk.