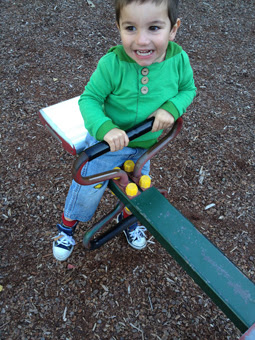 Yesterday in day 2 of KCWC I finished off my boy's Urban Unisex Hoodie and he wore it today, obligingly stopping his play now and then just long enough for me to take a couple of photos. He's at that age where he says and does some pretty funny things and has opinions on things you'd imagine he wouldn't even think about, in this case he was impressed with the buttons on his new hoodie. Ah, design potential maybe? ;-) 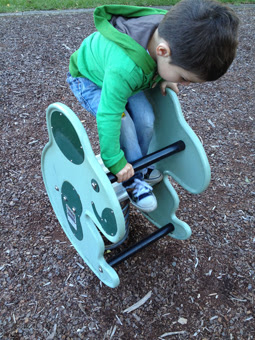 I'm pretty happy with how this turned out in that I like the way it looks, though I think I'll adjust the fit on the next one: deeper cuffs would be a bit more cozy for him and also a bit more length would help keep at bay that potential tummy gap between hoodie and jeans. In truth I probably should go up a size in the pattern but we'll see if I can be bothered to print and trace the pieces again... normally I trace patterns off the master onto interfacing, but in this case I thought I was safe - sods law.

The other thing I did in the name of KCWC yesterday was to drag the 2 littlies to my favourite local thrift shop, the one where you pay by weight ($8 per kilo). You see even though I'm still trying to stash bust, when I went looking in my 'knits' box mostly what I found was either unsuitable (thick fleece) or saved for 'something else' (a nice petrol blue jersey for me). And this pattern uses quite a lot of fabric for a child's pattern as it's fully lined. So I didn't have much to work with from the stash, hence the 2 different greens. I think those cute buttons ended up tying it all together, but there's no way I'd have enough fabric to make another hoodie, which I'd like to. Because even though it was a bit more work than I'd normally like to invest in a child's everyday shirt, which lets face it could be stained/ripped/lost or outgrown in the blink of an eye, I really like it. 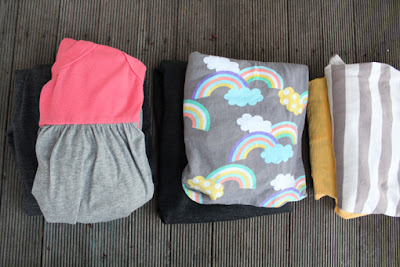 So... at the thrift shop I quickly grabbed myself 6 garments to cut up and re-use (while the kids ran laps of the clothing bins and I tried not to catch the eye of the staff, bad parent ;-). I was after grey and yellow tones for my boy but then found myself also with gelato colours and a cute cloud/rainbow print dress that I thought would be perfect for girl pyjamas.  Most of the fabrics are jersey or interlock, and also a couple of merino wool tops with thoughts of making leggings for my dress and skirt loving little girl. And I also got in that lot a little grey velour winter dress for my little girl - what a score for $8!! Now to actually do something with them... I've promised myself I will NOT let them languish in my stash!

See you tomorrow for the run-down on day 3, hopefully.
Posted by Jo at 8:42 PM