This week I finally finished some pieces in my Coffee Boy design. The realisation of this new design has been a bit of a labour of love for me. 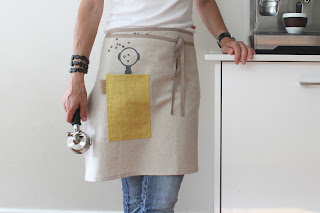 You may remember that this design started as a t-shirt for the Mr. Then I had ideas to extend the design that I just couldn't stop thinking about so I decided to just do it :-)

The Sweets Workshop Gocco exhibition has been the catalyst in forcing me to stopping tinkering and get on with it! The exhibition started yesterday and I'm so pleased to be part of it with the prints I did with Emma and John . 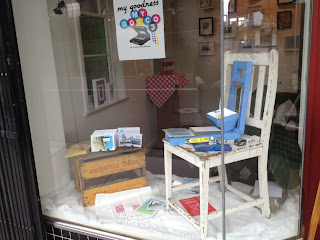 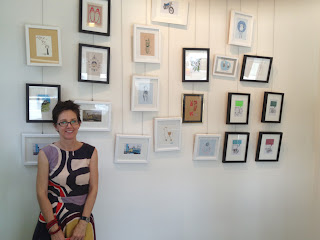 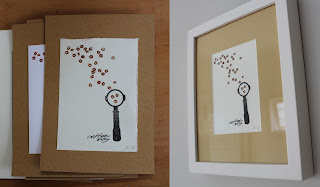 Prints on card and framed print

A Coffee Boy tea towel and apron have gone to the handmade retail side of the Sweets Workshop and it's so great to see it all sitting together nicely as a family. A few pieces are also available in my Etsy and Madeit shops. 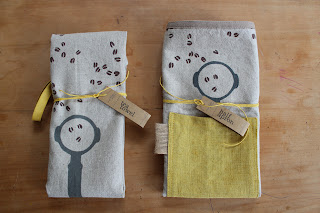 I love how each placement of the 'face' gives a slightly different expression. The tea towel and apron above appear to be looking at each other, hee hee! 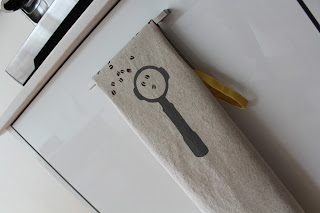 I've put a lot of attention into the details and loved getting all the separate elements working together. 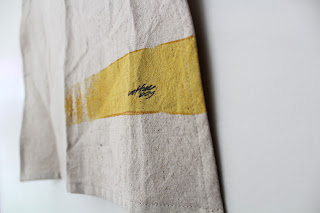 I made another version of the Deer & Doe's Belladone Robe a while ago but have just gotten around to taking some photos of it. It's definitely my most successful one yet, and has been worn several times already.

I used a printed linen that I found at Spotlight and made the same changes as last time: grading up a size at the waist and hips and moving the bust darts down a bit. This time I didn't pipe the edges and I put the binding on the inside so it wasn't visible as I thought there was enough personality already in the print.

The back detail is definitely my favourite in this dress.

But the pockets were fun too. I used a cute little mini pom pom trim between the top skirt piece and pocket lining, sandwiching it between the two. I'm pretty fond of this little trim and have also used it as trim on a cushion cover recently.

I'm hoping this dress will take me through a few seasons. So far I've worn it in hot weather with thongs and floppy hat...

And as a tunic with jeans...

But I'm thinking it could also go well with a cardigan and boots when the weather cools down.

I have yet another Belladone on the go, but after that I think I'll give it a ret for a while - there are other patterns calling me ;-)
How about you, are you addicted to a particular sewing pattern at the moment?

Posted with Blogsy
Posted by Jo at 4:51 PM 7 comments:

Labels: fabric, patterns, sewing for me

In my creative space this week I'm enjoying the business of matching...

Starting with a design and then layering colour, fabrics, textures...

And tinkering until it's just right. So much fun and so satisfying.

And any excuse to play with some new hardware is good, right? ;-)

Playing along with My creative space here.

Have a good weekend!

The craziness of children starting school and preschool is finally starting to settle here in our household, and so at last I have been able to get back into some screenprinting.

Whilst trying to work out how to get back into paid work (with all the challenges it brings for me and the family) I'm planning on bringing to life some of the many design and product ideas I have swimming around in my head and hopefully produce a few items to sell in my Madeit and Etsy shops and The Sweets Workshop.

So, in my 'days off' when all the kids are out of the house, I've been having sporadic frenzies of printing and sewing in between school runs, housework and errands, and finally have a few little wristlets and purses in my shops. 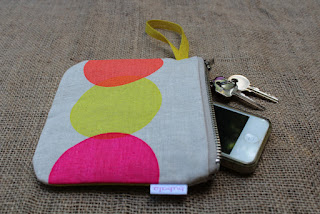 I had such lovely positive feedback about my 'lights' print late last year that I thought I'd start with a run of it. I love how the ink sits on the linen in this design, adding a translucency to the design. Matching fabrics, colours and details like little jute ribbon tabs is all so satisfying. 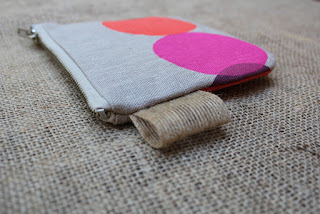 And of course I get to design and use some little labels too, which I aways enjoy. Give me a bit of string and some cardboard and I'm happy ;-)

This week I completed a project that ticked lots of boxes for me and left me feeling pretty satisfied, yay!

The starting point for this one was that we'd had 2 garbage bags full of those little bean bag beans hanging around in storage for ages and over time they'd gotten a few holes and leaked, arghh! Have you seen what a mess those pesky little white balls make? They get everywhere. But I didn't want to throw them out so I'd planned to make bean bag covers for them and encase them in fabric forever!

Sitting in my stash for ages has been Made's Rollie Pollie pattern, bought for this exact purpose. The pattern comes in 2 different sizes, and even though the small size is marked for children aged 1-2 and my kids are older (7, 5 & 3) I decided to make this size as I wanted them to be like little seats or poufs, portable and not taking up too much precious living room space, rather than big and slouchy.

I had intended to use the stripey fabric on the left for all of them but only had enough for one (I'd forgotten I'd previously made this duffel bag from some of it). So it was off to Ikea to choose some more. Big girl chose the ladybird fabric and I couldn't go past the lovely birdy design again. Then I ran out of beans after the first 2 so had to use some old stuffing from pillows... veering away again from my initial reason for making them! But of course I couldn't stop at two - I'd never hear the end of it!

The pattern includes instructions for making both the inner, to encase the beans, and then the removable outer with handle. I knew I'd need to have washable outers - these have had a lot of love and use in just this short time, but I must admit that by the time I was up to the third Rollie Pollie I was pretty over it and so the sewing was quite rushed. But they'll do fine.

And here's the other reason I wanted to make them pouf-like :-) Hope you have a relaxing, creative weekend!
Belatedly joining in on My Creative Space this week.

Recently I had the good fortune of being invited to do a Gocco printing workshop by Emma and John at The Sweets Workshop along with my buddy Lamina from Do A Bit. We spent a lovely Sunday morning learning about and playing with this iconic little machine.

Emma and John were great teachers, very patient and helpful. And you can see the current exhibition 'Home' by Beth Taylor on at The Sweets Workshop there behind John and I - such a lovely backdrop!

It's been ages since I've printed on anything apart from fabric so it was nice to have a change. I can see how one of these little machines would come in really handy when you're wanting to print invitations in particular. I'd love to have one tucked away for those times. Sadly I hear they're not being made anymore but I live in hope of stumbling across one in a charity shop one day!

Later this month Emma and John are hosting an exhibition of Gocco prints which Lamina and I will be part of. I'll keep you posted :-)

Posted with Blogsy
Posted by Jo at 2:39 PM No comments: