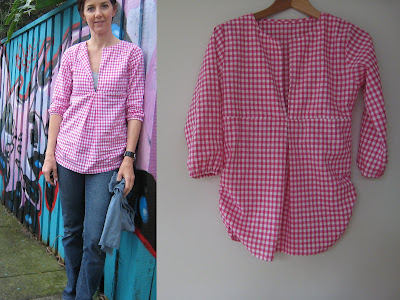 Over the school holidays I kind of lost my enthusiasm for blogging, probably partly because I've been so focussed on the kids that I haven't had a lot of head space for creativity. And oddly we haven't been doing anything really crafty this time around, rather enjoying the sunshine outside and seeing friends, which in itself is great for both the kids and me. I gain enormous support and strength from my mum friends, whether they're old friends or new friends gained through the link of our children.

I have squeezed in a bit of sewing though (where there's a will there's a way!), which I'll try to post about now that life is returning to normal routine with school resuming tomorrow.

OK, gingham. What does it make you think of? Tablecloths, teatowels, school uniforms? I once bought what I thought was a gorgeous summer top in it, and the Mr promptly laughed when he saw it and pronounced that it was pure Elly May Clampett... which wasn't really the look I was going for, but I still loved it. 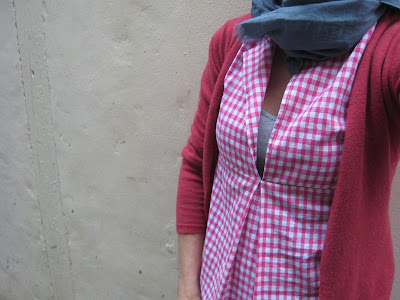 When I spotted this 100% cotton, soft, pink and white gingham (bought with a voucher from a lovely friend, thank you A) I knew it would make a lovely shirt. I had in mind a particular design with bib front and gathered details, but couldn't find a pattern for anything similar. With a lot of trial and error I think I could draft a pattern for one (using Cal Patch's fabulous book as reference). But it was instant gratification I wanted (some things never change!), so I used my Schoolhouse tunic pattern again. It worked out pretty well. Not perfect, but wearable, and satisfied the urge for a new shirt in the pretty gingham.

What do you think of gingham? Love it? Hate it? Indifferent? Just want to have a picnic in the park when you see it? ;-) 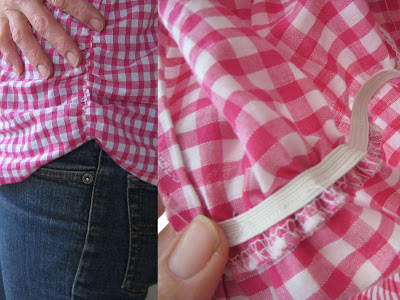 • I did the same as before: one pleat on the front instead of two, smaller size etc.

• Also I added a little detail to the sides of the hem. I thought it looked a little harsh with the straight hem so I used some elastic to make little gathers at the bottoms of the side seams to give a rounded effect. I'd considered just cutting it in a curved shape but thought the curve might mean I wouldn't get a nice turn up on the hem. I considered doing a bias binding around it to get around this issue (and the detail of the changing direction of the checks would have been nice) but decided on the elastic to give a bit of continuity between the hem and the sleeves. Yes, I'm a nerd, I love the little details and probably put far too much thought into them, but I get a kick out of it ;-)

Has anyone tried Fabenmix patterns? I've got my eye on a couple which are just what I've been looking for (pinned here).
Posted by Jo at 3:10 PM

Labels: blogging, sewing for me