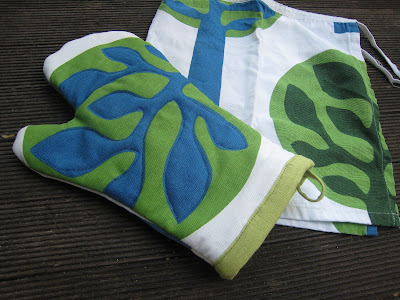 Recently I finally got around to making an oven mitt to match the aprons I made a while ago. The state of the only oven mitt in the house was pretty dreadful but I think I found the thought of making a new pair a bit daunting. However I wanted to make them as presents so thought I'd make one as a test run. 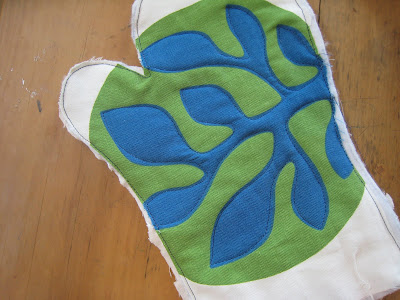 Taking pointers from tutorials like this one, first I traced a pattern from my existing dying oven mitt, then cut out 2 in the blue and green fabric for the outside, 2 in a white linen/cotton blend for the inside, and 2 in heat-proof batting. I sandwiched a piece of that between outer and inner pieces of fabric then machine stitched through the layers. 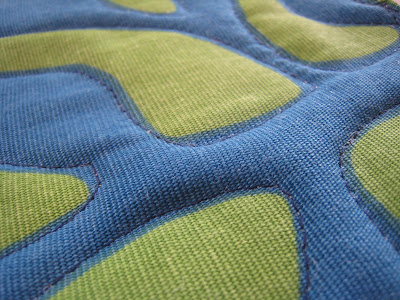 Even though I do a lot of sewing, I have never tried to make a quilt - it's sitting as an idea in the back of my mind but I haven't been brave enough to attempt it. But this kind of mini-quilting-like sewing was really fun, and I thought even the inside looked kinda cool... 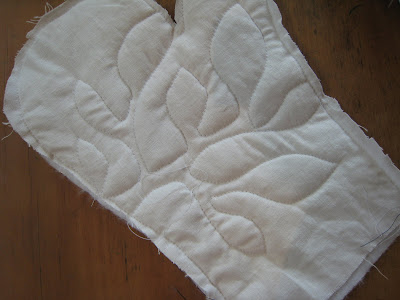 Anyway... I then did the same to the other pieces, overlocked (serged) the 2 finished panels together, turned them inside out and bound the bottom edge in a scrap of green linen I had lying around. Binding is not my favourite sewing technique because I find it hard (impossible) to get just right, though I love the way it looks when it's done well.

It turned out OK and has a mate sitting half finished (ready for 'Half finished Projects January' :-) And it performs its duty well, but was a bit of a pain to make really, so it's off the xmas gift list, at least until next year when I've maybe had more practice.
Posted by Jo at 1:00 PM