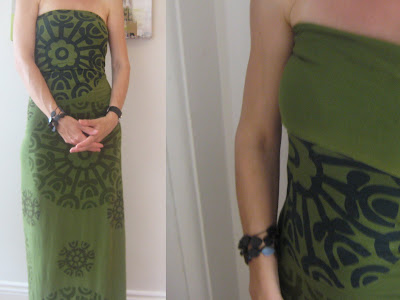 During the heatwave a few weeks ago I decided I didn't have enough dresses and looked around to see what I could quickly make one out of. Something stretchy would be quick, and I remembered I had bought this great piece of hand printed jersey from Prints Charming during their sale last year. I'd used some of it for my boy's monkey pants and put the rest away, unsure of what to do with it. As soon as I imagined it as a dress I knew it had potential... 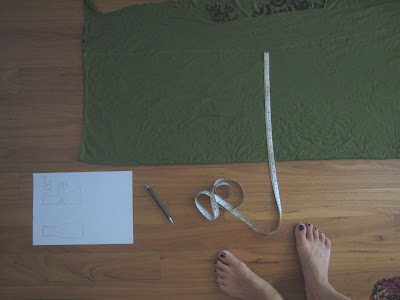 So during a 40c day, with the kids sprawled out in front of the fan, I set to it with pins and scissors. I wanted to make a tubular dress, floor length, with a fold-over top. It's in the same vein as the beautiful 'Love me 2 times' dress style from Gaia Conceptions on Etsy that I've long admired.

There was only just enough fabric to do it, so one seam right down the back would be the most economical use of fabric. I took some rough measurments of my bust, waist and hips, then folded the fabric in half and marked it out. Next I did some rough tacking by hand, rather than machine stitching, which would have taken too long to take out if the fit was wrong... which it was. So, after several try-on's, take-off's and adjustments it was finally OK. 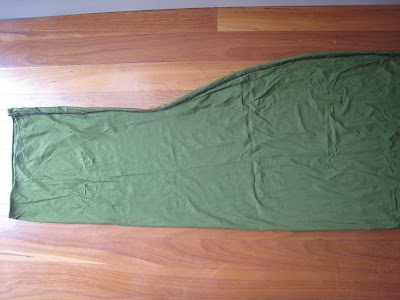 I then just sewed right down the seam with my overlocker (serger). As I have no stretch stitch or zig zag on my old sewing machine, this would have to do. When I tried it on the seam at the back looked a bit puckery, so I wondered what to do for a while then in a 'duh' moment realised I could just wear the seam at one side and the tension would pull it out. So: tube of fabric, one seam, and hey presto, a dress.

As with any experimental sewing project, there are positives and negatives to this dress:

+ Positives
• quick to sew
• stash-busting - yay!
• comfy to wear
• versatile: can be worn with top folded over, either inside or outside, also can turn it down several times at waist and it becomes a skirt.

- Negatives
• a bit tighter fit than I would have chosen around the hips due to running out of fabric!
• the style's a bit confused - the fabric is casual but straplessness and clinginess make it look a bit more dressy. So a bit showy for day but casual for night... or maybe I'm being too picky.
• relies on tension only to stay up, so I'm always a bit nervous that one of the littlies will yank it down!
• Serging only on seams means it will probably come apart some time soon...

But hey, for here and now it answers the brief of a quick, comfy dress.
Posted by Jo at 12:11 PM

Labels: drafted by me, sewing, sewing for me