Bread of the week - potato focaccia 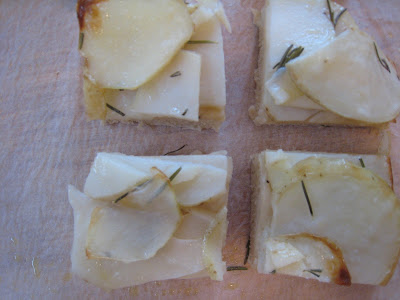 I've loved potato pizza since the Mr and I visited Rome way back in about 1996. Eating a big slice of it (which was sold by weight, as the pizza bars there do) along with some marinated artichokes, standing on the street, is one of my strongest memories of Rome. All that history and culture and it's the food I remember the most!

Whenever we make pizza at home I make a potato one, sprinkled with fresh rosemary and salt flakes. This is a heartier version of that, as it has a much thicker base and more potato on top than I'd put on the pizza (the pizza gets too weighed down with too much topping). 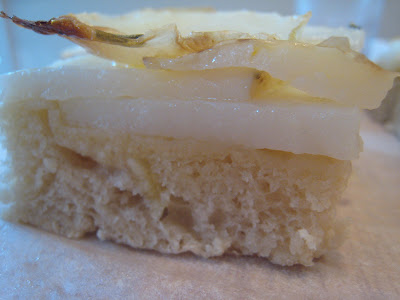 I didn't photograph the process, but it's pretty simple:

Start by taking out about a third of your container of dough*. Using heavily floured hands, shape it and pull into about a 30cm diametre round, placing on your baking paper. It should be around 1cm thick. Let it sit until it comes back to room temperature. This is really important as you want it to have as much air and lift as possible, otherwise it will be heavy and doughy and just not great!

Meanwhile, slice 2 large potatoes (I used washed ones and didn't peel them) as thinly as possible so you end up with large thin rounds. Then either steam or microwave until just tender. 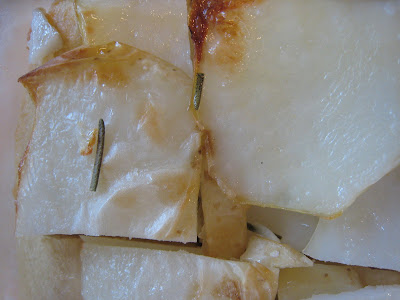 Put into the oven on the top shelf on a pizza stone if you have one (see my transfer method in this post). Bake at 220c for around 20/30 minutes. Have a look at the edges of the dough and when it is nicely brown you'll know it's done. Leave to cool a bit then cut into squares. I served this with baked stuffed capsicums (peppers), and I think it would be nice with any sort of braise or stew. Enjoy! 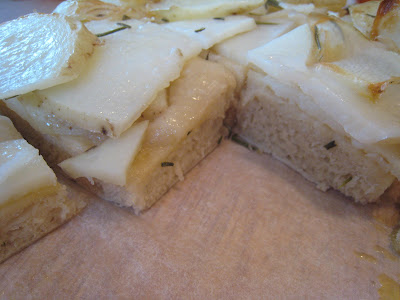