Bread of the week - cinnamon scrolls 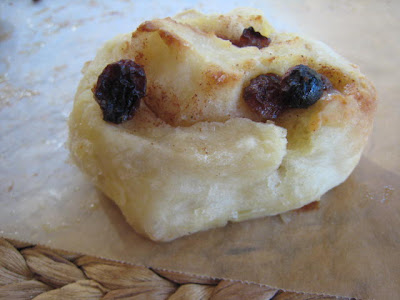 Following on from last week's bread post, here's the first 'bread of the week', cinnamon scrolls.

I like to make my big girl a snack to have after her early morning class at school on Wednesdays. I try to cook enough to send one to work with the Mr and keep some at home to take to the park with the littlies.

The basic bread recipe works well as scrolls and we've tried a few fillings, sweet and savoury, but I think this is one of the big girl's favourites. She requested it last night - well, she requested chocolate filling, but this was her second choice, we'll leave the chocolate ones for the weekend (a girl after my own heart :-) 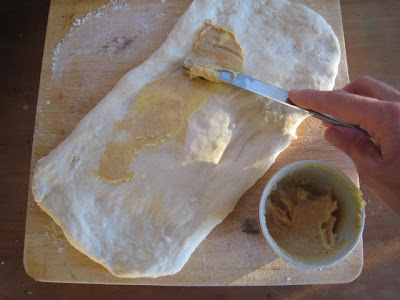 OK, start off by pulling out a lump of dough from the fridge. I used about a third of the full container. Pull and stretch it (or you can use a rolling pin if you prefer) into a rough rectangle (I did about 30 x 20cm) and let it rest til it comes to room temperature or at least for a while. Set the oven to 220c with oven shelf at the top and pizza stone in if you have one. Spread on a mixture of softened butter (I used about 2 tablespoons), sugar (about 1 tablespoon) and cinnamon (however much you like). 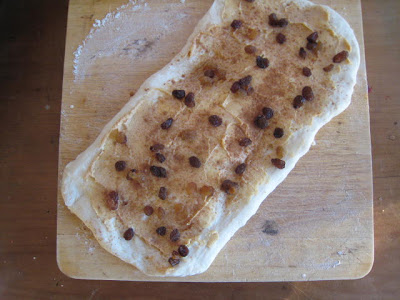 Then sprinkle on some sultanas and some more cinnamon. 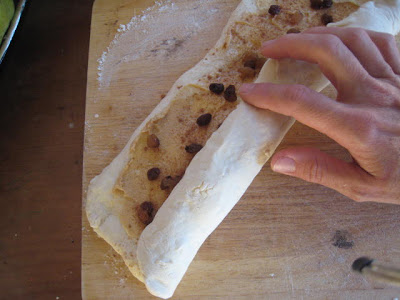 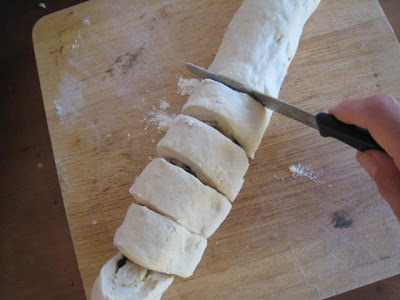 With the seam underneath, cut your roll into equal lengths (I did pieces of around 3 cm and ended up with 10). I like to use one of my trusty Victorinox serrated knives. My brother gave me a set a while ago and they are great - very sharp! Dip your knife into flour each time you cut and use a light sawing motion. 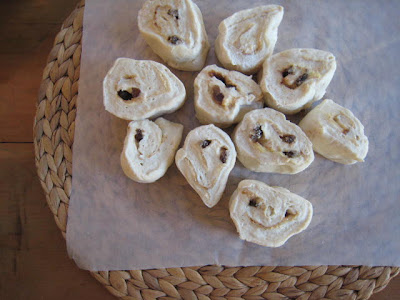 Now lay them cut side up onto a piece of baking paper, close together but with a bit of room to spread. That way you'll get some with nice crisp outer edges and some soft squidgey ones from the centre. 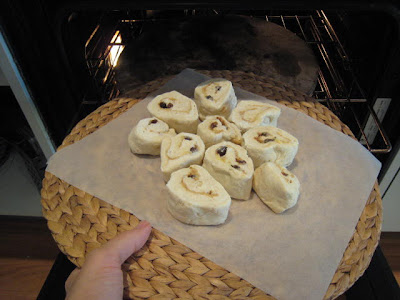 Then slide them into the oven. This can be a little tricky. I take them to the oven on a flat surface like a plate, chopping board or placemat, pull out the oven shelf a bit, then slide the paper over onto the pizza stone. 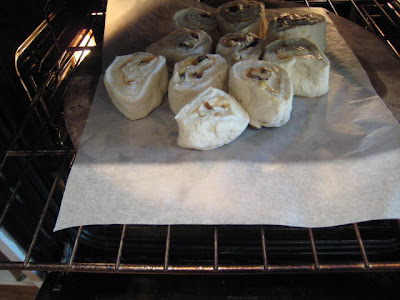 I didn't have a free hand to take a pic of me sliding it onto the stone (didn't want to bother him indoors to help me on a school morning!) but here it is on the pizza stone. Alternatively you could just put them on a baking tray, but if you have one I think the pizza stone works well and is worth the effort of the sliding. 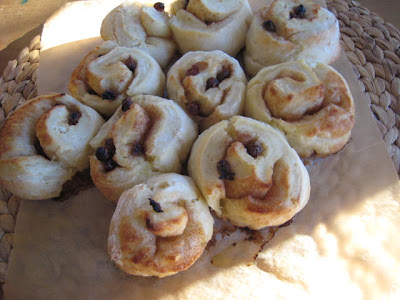 Cook for about 10 minutes. You'll know they're ready when they are puffy and starting to brown around the edges. Don't worry if some are paler in colour than others. Admittedly they don't have the uniformity of store-bought scrolls but I like to think of these as having a kind of rustic beauty! Leave til cool enough to handle then pull apart and enjoy. 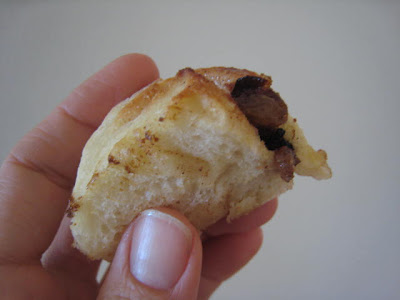 It's so nice to be photographing food in the daylight! That morning light is lovely, as opposed to the kitchen halogens that never give a great light.
Posted by Jo at 9:44 AM