Bread of the week - calzone 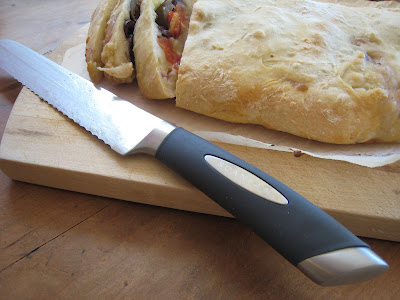 Calzone is a closed pizza. I made this large one for the family to share for lunch but you can also make smaller individual ones. 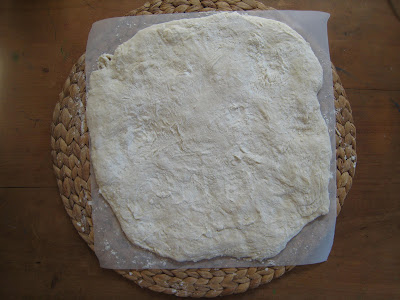 With floured hands, take a chuck of dough about the size of a grapefruit from your container*. On a piece of baking paper flatten it into a large circle that's about 1.5cms thick. 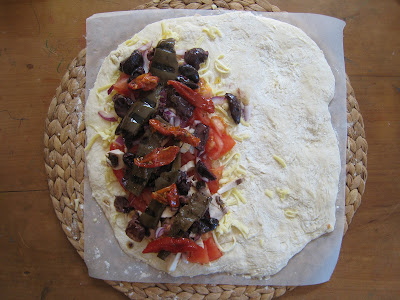 To one half add cheese and any filling of your choice. I used fresh tomatoes, semi-dried tomatoes, pickled eggplant, mushrooms, spanish onion and olives. If I'd had fresh basil I would have torn some up and strewn in on. And if the kidlets weren't going to be eating it I'd add lots of fresh chili. You can use anything you like though. 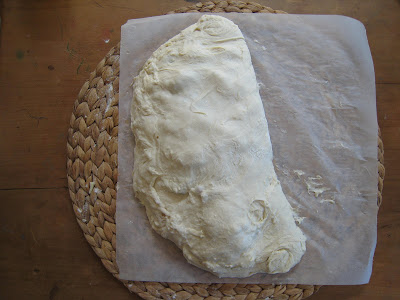 Fold the other side over and pinch the dough together to seal it into a parcel. 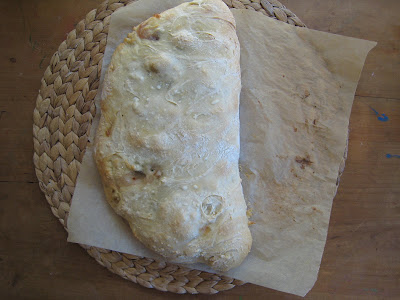 Put it into the 220c preheated oven on the top shelf on a pizza stone if you have one (see my transfer method in this post), or alternatively a baking tray. Cook until it's nice and brown. Mine took about 20 minutes - you want it to cook properly and as there is a bit of weight in all the dough and filling it takes a while. 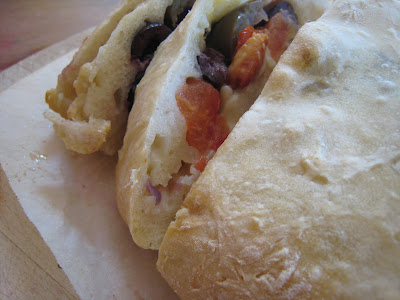 When it cools a little cut it into thick slices and eat while warm. "It's like a Kinder Surprise" says my big girl about cutting it open to reveal the contents.

Can I also just point out my shiny new bread knife in the top picture. I've stumbled along for ages with an old crappy knife for cutting my precious loaves of bread and I can't believe the difference now that I have a good knife. It was a bit of a struggle getting it though, involving an extremely unhelpful sales "assistant" at David Jones (aren't they meant to be known for their service? Obviously not). Rather than answering my question on what makes a good knife and what the difference is between a $70 and a $200 knife, all she could muster up was an irritated "the chefs use them" over and over again. Obviously wasting her precious time, I chose the $70 model and let her get on with propping up the counter. Needless to say I hate bad service. OK, rant over. I urge you to go out and buy a fantastic bread knife if you don't have one. Trust me, it's worth the effort and expense.

* basic recipe listed on this post
Posted by Jo at 3:11 PM

Labels: bread of the week, recipe