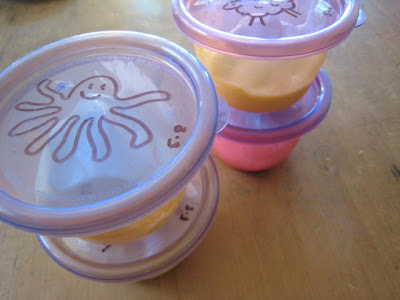 There are a few foods that I've always thought were not worth making myself (simpler to buy them) but I've changed my mind about some in recent years, I guess since having children.

Yoghurt was one I didn't consider making until recently. A friend told me a while ago about her yoghurt making experiments and it sounded interesting, but a bit time consuming given everything I was trying to do at the time, plus I was happy enough buying it. Happy enough, but the type of yoghurt we bought for the kids had bugged me for a while.

While pregnant with no. 1 I had lofty thoughts that my baby would eat only the best foods. This included the 'good' yoghurt I enjoyed eating, natural yoghurt with live cultures, no additives or sugar. I would sweeten this with fresh fruit purees for my baby and all would be well... or not. Let's just say that we ended up with princess strawberry yoghurt gracing the shelves of our fridge and I didn't feel that happy about it. As well as the nutrition factor, I try not to buy too many licensed things (food or otherwise), and so when the baby (no. 3) started eating lots of yoghurt and suddenly I had 3 hungry mouths eating Disney special I decided that enough was enough (or at least I'd give something else a try, and admit defeat later ;-). 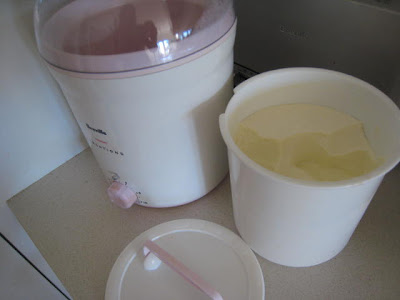 So when I was offered a discounted yoghurt maker I jumped at the chance. Essentially it's just a kitchen gadget with a heating pad to keep the ingredients at the right temperature. You still need to heat the milk and add cultures. But I figured the machine would take out some of the guess work and experimentation and therefore get rid of my mental block about making it myself.

The first attempt was OK but the second attempt I'm really happy with, and quite excited about, not least because the kids love it as much as I do.

For the recipe I have spliced together one I found online and also the one from the gadget instruction manual. If you're interested, it's below. But don't ask me how to make it without a 'yoghurt maker'! 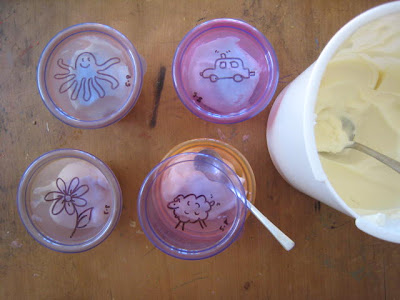 Obviously part of what kids like about the store bought yoghurt is the individual pots, opening the container themselves and the decoration. So I bought some little colourful plastic containers to decant the yoghurt into and drew pictures on the lids, listing the date it was made for my reference.

I decided to make a sweet vanilla flavour first as I didn't want to put them off and risk them labeling it 'grown-ups yoghurt' as they do with the Greek yoghurt I like. I've found kids have a way of making a quick judgement and sticking by it for a very long time, and it's hard to change their minds! So the sweet is a concession to their palettes. Later I hope to experiment with reducing the sugar, using honey as the sweetener and adding fruit. But at least I know what's in this, hopefully it's a bit more healthy and I'm keeping some money in our pockets instead of giving it to Nestle.

Have a happy weekend! 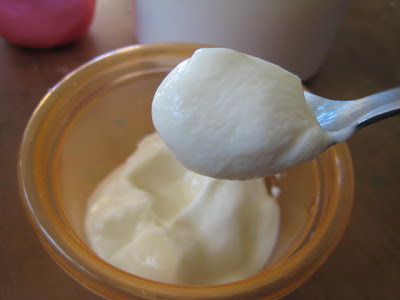 Bring milk, powdered milk, and sugar nearly to a boil (80-85c on thermometer) in a saucepan, stirring often. Remove from heat.

Cool quickly by filling the sink with cold water and ice cubes, set the pan inside, stirring often until it cools to 40-45c (this will take about 5 minutes).

Gently stir in vanilla and yogurt starter (don't beat or whip). Ladle into yogurt container and process about 8 hours in your yoghurt machine (the longer it's processed, the more tart it will taste). Check to see if it's about as tart and as firm as you want it (otherwise process for longer). Do not stir. Refrigerate for 2-3 hours at least. Refrigeration sets the yoghurt further.
Posted by Jo at 2:37 PM