The weekend's a time when I sometimes get the opportunity to cook something different or fun, a change from the quick and easy routine of weeknights. Come and see what I've been up to this weekend.. 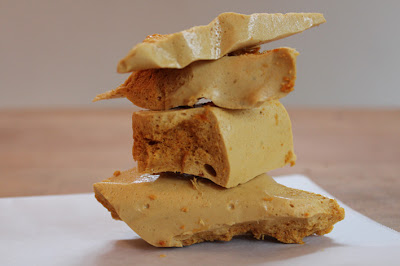 Our little girl just spent the last few nights in her own bed (instead of ours) - woo hoo! She was so proud of herself yesterday morning and we were so pleased with her (let's not even think about whether it will continue at this stage) that I wanted to give her a treat, so we made honeycomb together. 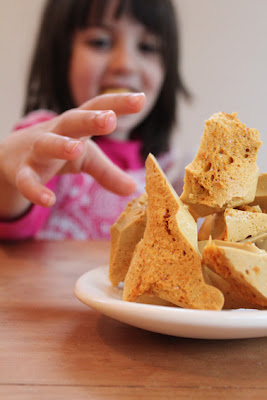 I think I was in my teens last time I made it (with my mum) and I remember it bring tricky, so I was quite careful with it and used a candy thermometer to get the toffee base right. I thought the kids would enjoy seeing the mixture fluff up when the bicarb soda was added and they did but I think I got more of a kick out of it than they did! 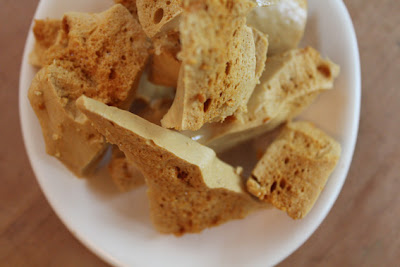 I used this recipe and it turned out pretty well, quite an open texture inside with a nice honey-ish flavour. As it was also our "movie and dessert night" that night I thought I'd make a dessert out of it too. So I crushed up some of the honeycomb and mixed it with some softened vanilla ice cream to make hokey pokey. Then I added a hot chocolate sauce to pour over (heat some cream, add some chopped dark chocolate and stir til melted & smooth). Chocolate and honey is a combination that I really like (as well as chocolate and orange chocolate and mint, chocolate and... ;-) I then sprinkled over some crushed honeycomb to finish it off, you know, because it needed some more sugar (not!). Strange sounding dessert but it was pretty yummy. I'm dreaming about having it again already. 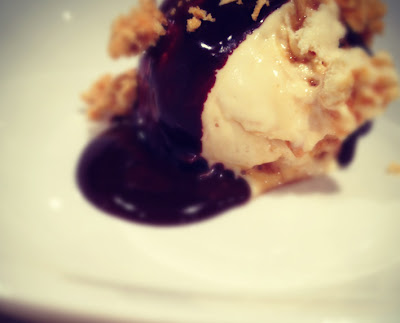 As a sweet by itself (rather than a dessert) I think the honeycomb pieces would be better half dipped into melted chocolate (like a Violet Crumble or Crunchie bar) but I was feeling pretty concerned about our dental health by this stage so thought I'd better not do it - that would be going just a step too far!