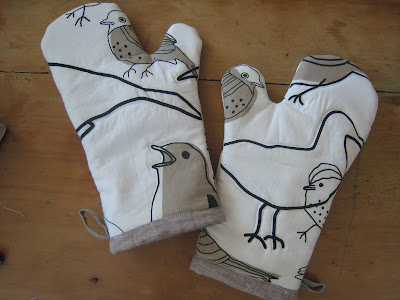 After saying I wasn't going to make oven mitts as Christmas presents as they were fiddly, I decided to anyway and made one pair each for 2 of my sisters-in-law. What I didn't do (but had been part of the plan originally) was to print my artichoke print onto linen and use that to make the mitts. Just a tad too ambitious for my Christmas list!

This first one is made from an Ikea cotton bird print that I thought was a little humorous and might amuse the recipient, sis-in-law A. I had that lovely (though scary!) feeling of anticipation when she commented to me on Christmas morning, while putting her turkey into the oven, that: "I really need new oven mitts!". Little did she know what was inside her present under the tree, hee hee! So obviously watching her surprised face when she opened her present a few hours later was one of the highlights of the present opening :-) 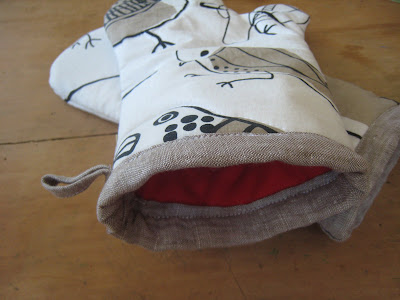 For the outside I used an Ikea cotton print fabric, bound the edge (grr, not fun!) and made a tag with an oatmeal coloured linen, and for a little extra personality I lined them in a bright orange thick cotton.

For sis-in-law B I used "Gunilla" Ikea fabric, which she'd seen on the chair I recovered and commented that she'd liked. 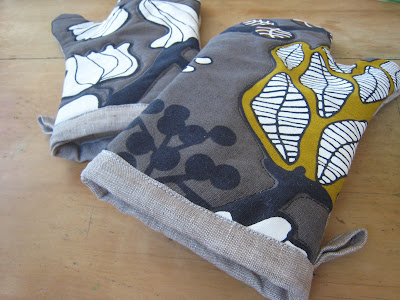 As with the other pair, I did my haphazard machine quilting around whatever shapes I thought would suit it, which was really fun, then bound them again in the linen. I also used that linen for the reverse side of this pair and did some quilting to visually mirror the pattern on the other side. 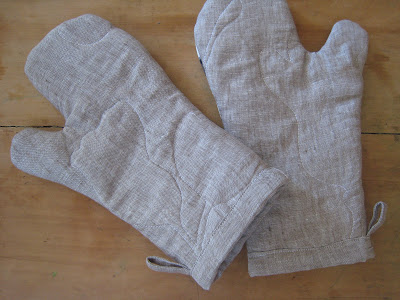 Aside from the tricky bits again (binding, curves, turning inside out with lots of bulk) I did enjoy making these, not least because I imagined them being used and enjoyed (fingers crossed!).
Posted by Jo at 11:00 PM