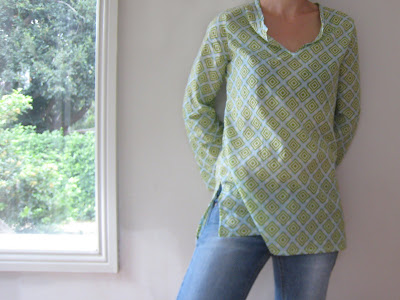 I've been mostly doing 'sewing for me' lately - sorry kids! Each time I finish something I think of something else I'd like to make. The other day I realised I was wearing a full outfit (2 pieces) that I'd made myself and it kind of amused me, just like it does when I wear a full op shop outfit. I think the feeling of resourcefulness is satisfying, and not something that I get elsewhere as I don't work outside of the home these days. Hmm, anyway...

Here's the finished Shearwater Kaftan that I blogged about in 'my creative space' last week. I love how each one I've made has it's own individual look. 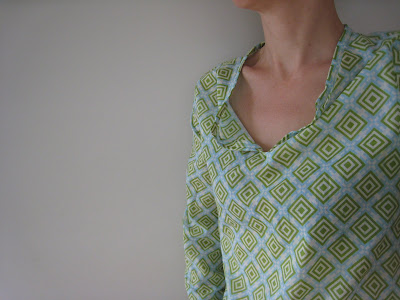 I read a not so favourable review of the pattern on a blog a while ago that I thought was a bit unfair. The person said she had to alter some measurements, but hey, we're not all made with cookie cutters! And she felt it was not of the calibre of a tailored shirt pattern and obviously designed for beginners. But I think she missed the point, as it's meant to be an unstructured cover-up for the beach or whatever (though I wear it for everyday wear!). Sure it's pretty quick and easy to make, but that doesn't mean it's inferior, in fact it's a positive to me when I'm trying to fit in a bit of time here and there in the evenings. So on the instant gratification scale it's pretty high up there! 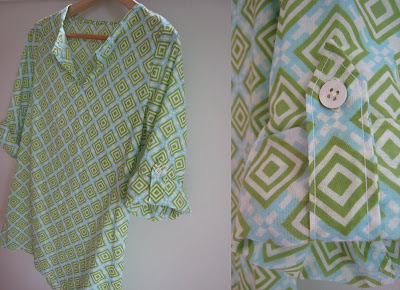 Each time I've made this I've altered a few things, which I would on most patterns. This time I did French seams (I think that's what they're called?) for most of the seams so that when the sleeves are rolled up they look nice. 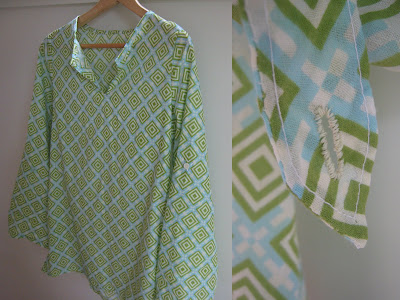 And as usual I did my extremely rough buttonholes by hand. My sewing machine doesn't have a buttonhole feature (it's an oldie passed down from my Granma) so I just muddle my way through with a needle and thread until the hole that I've cut is bound, and it works OK. Wouldn't want to do a tailored shirt that way though ;-)

On an unrelated note, I got to wear socks today - oh the novelty of it! Finally the heat has dropped off a bit and it's a weird feeling to cover my feet again for the first time in ages, which I know must seem worlds away to you Northern hemisphere dwellers at the moment. Now to stop myself from dreaming of all the winter clothes I'd like to make...
Posted by Jo at 4:10 PM

Labels: patterns, sewing for me