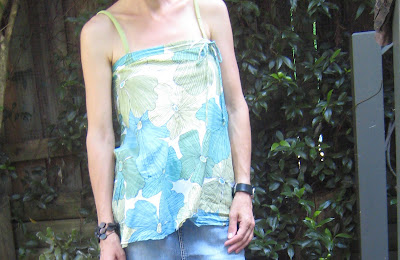 When I have clothes in my wardrobe that don't quite work, it annoys me. You know the type - not quite the right fit, or the colour doesn't quite suit you, the fabric itches or clings in the wrong places... but you persist, then give up, until enough time passes that the memory of the annoyance fades... you try it again, it annoys you again and so on... sound familiar? (or is it just me?!)

I decided to fix one of those during the recent heat wave when I was looking for anything cool to wear. I'd picked up a One Teaspoon skirt on an op shop trawl and loved the fabric, a very soft voile cotton with blue and green print and a little tie detail on the hip. But the cut just wasn't quite right on me and it always felt wrong when I wore it. I'll spare you the 'before' skirt shot that I took - the knees, the cut, the unironed creases, ah, the shame! 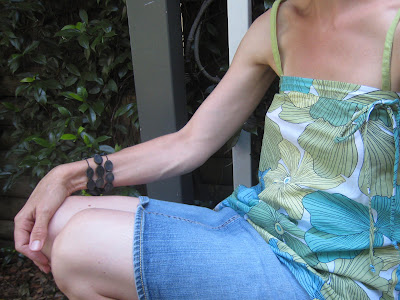 Anyway, I decided to make it into a top. I did this by making 2 straps out of a scrap of pale green linen, and sewing them at the front and back. There was already a zip in the side, which now sits under my arm and when open makes it loose enough to put on. I was originally going to make the straps out of the little tie detail, but decided I liked it where it was. And I thought I'd put a bit of shirring in the back if needed, but it was fine as it was. 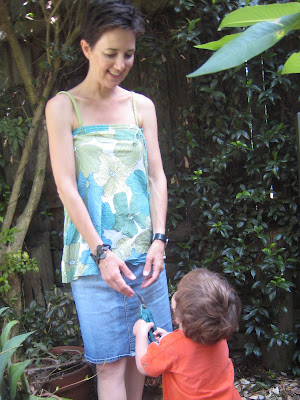 I'd definitely try this again on another skirt. Even though my method was haphazard and could barely classed as sewing, it's made this garment a whole lot more wearable, and eliminated one of those 'arghh!' wardrobe moments :-)
Posted by Jo at 2:00 PM