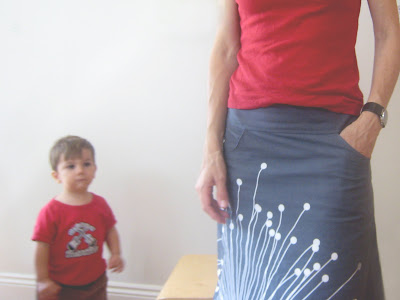 When I worked as a graphic designer I was most affronted if anyone suggested that I may have stolen an idea from somewhere else. Certainly in any creative field you're affected by things you see and subconciously maybe you rehash an image you've seen before, but to blatantly copy someone else's idea just doesn't seem fair to me and also would suggest I'm not capable of having a creative thought myself, which is insulting.

But I seem to have broken my rule recently: when I saw this post by Tania from the gorgeous blog Myrtle and Eunice, I recognised some fabric. I remembered that I'd bought a piece from Ikea ages ago, meaning to go home and make a skirt out of it, straight away! Of course that hadn't happened and consequently it's been stuck in the depths of my stash ever since. When I commented on it to Tania she pointed me to this post of hers and I was smitten. The A-line style was what I also had in mind but her placement of the fabric's pattern was superb. So I copied. Shamelessly. Tania, I hope you consider it flattery, coz it is :-) 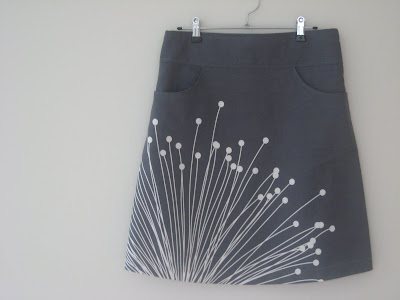 Being excited, the first version I whipped up in one evening and it was rubbish (no pics, too shameful). I'd cut a pattern from an old A-line skirt and hastily put a zip in the side. The fit was not quite right, I hadn't done the waist properly etc etc. Too much haste!

So after wearing it once I pulled it apart and started again. This time I tried to be patient, take each step carefully and sew slowly. So often I just rush through something and it doesn't turn out that well. 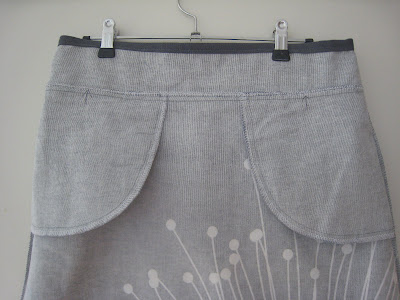 I added a yoke (not sure if that's what it's called on a skirt?) and some pockets (inside out pic above). For these I guessed what size might be good (bigger would have been better!) and put them coming off the yoke so that they were not too high up. Then I moved the zip to the back. 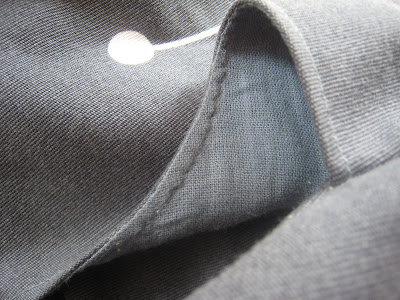 I lined the pockets in a mid blue soft cotton to decrease the bulk of the layers and top-stitched everything carefully. Which makes a change from my usual slap-dash sewing! Unlike the first version it's actually nice to wear. Maybe I should change my old ways for good :-) 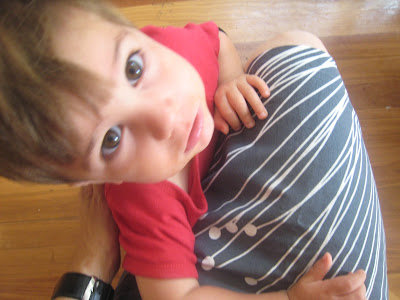 It seems to have approval from a small boy too :-) Have a lovely weekend everyone.
Posted by Jo at 10:49 AM

Labels: drafted by me, sewing for me